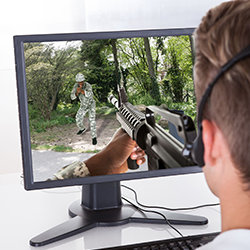 Children today are immersed in entertainment and news media, like fish are immersed in water. Using hand-held devices, children can consume media just about anywhere or anytime they want. Violence is a common theme in the media (e.g., TV programs, movies, videos, video games, music, books, and comic books). Pediatricians, policy makers, and parents often wonder whether violent media are harmful to children. Fortunately, we don’t need to rely on unreliable sources to answer this question, such as common sense, gut feelings, intuition, instincts, premonitions, or the biased claims of the media violence industry and its apologists. Science has provided us the answer to this question. Over the past six decades or so, hundreds of research studies have been conducted on this topic. Experimental studies have shown that exposure to media violence causes people to behave more aggressively immediately afterward. Field experiments have produced similar effects in natural settings with realistic measures of aggression. The effects can be long lasting too. Numerous longitudinal studies show that exposure to violent media as a child predicts aggressive and violent behavior many years later as an adult. Although there is never complete consensus in any scientific field, the evidence is so convincing that dozens of major scientific and medical organizations have issued statements about the harmful effects of exposure to violent media, such as the American Academy of Pediatrics, American Medical Association, American Psychiatric Association, American Psychological Association, the U.S. Surgeon General, the Society for the Psychological Study of Social Issues, and the International Society for Research on Aggression. Violent video games may be especially harmful because of their interactive nature, but more research is needed on this issue. Consequently, pediatricians, parents, and policy makers should take steps to protect children from the potentially harmful effects that can occur from violent media exposure.

How much time should children spend consuming media?

The American Academy of Pediatrics recommends no screen time for children under 18 months old, and no more than 1 hour of screen time per day for children less than 5 years old. For children ages 6 and older, consistent limits on screen time and the types of media should be enforced, and media should never take the place of adequate sleep or physical activity.

I have heard the phrase, “Correlation does not equal causation.” Can violent video games cause aggressive and violent behavior?

Experimental studies can establish cause and effect, and many experiments have shown that exposure to violent media can cause children to behave more aggressively. For ethical reasons, it is more difficult to study violence in experiments (i.e., severe acts of physical aggression that can lead to injury or death). But correlational and (especially) longitudinal studies can provide good tests of causal theories, and they have consistently shown support for a causal link between exposure to violent media and violent behavior.

Isn’t it true that only a small proportion of children and adolescents are affected by violent media? In other words, aren’t most young people immune to the harmful effects of media violence?

To be sure, not all children are equally affected by violent media and there are a variety of factors that can help lessen the risk (e.g., parental involvement, school-based interventions). However, no group is entirely immune from the impact of violent media (e.g., girls, nonaggressive children).

How can you tell if a video game is potentially harmful?

What else can you do?