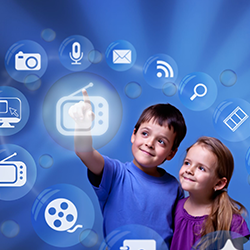 Estimates of media use among teens are staggering: approximately eight hours, or one-third of each 24-hour day, is the average amount of time a teen engages with media. A large portion of this time is spent using multiple media simultaneously, or “media multitasking.” Researchers are beginning to find signs that multitasking is associated with lower cognitive ability, impulsivity, and social deficits. Investigations are also beginning to reveal differences in brain structure between individuals who multitask frequently and those who multitask occasionally or rarely.

Learning environments are not exempt from media multitasking, as 91% of university students text while in class, and children as young as age five multitask while doing homework. Media multitasking has been shown to negatively impact the quality of learning, with speed, accuracy, and depth of learning all reduced in quality when students attempted to multitask. Even one-year-olds who were exposed to background television noise showed lower attentional control at age four than those who were not exposed.

Researchers are just beginning to investigate the impacts of media multitasking upon learning, and the need for more research continues to escalate. As media usage becomes increasingly ubiquitous among teens, new findings will help with increasing understanding and developing strategies for addressing media multitasking among teens.

Is all this multitasking with media causing us to become more distracted, more impulsive, and to learn more poorly?

Is all multitasking—not just multitasking with media—associated with these cognitive, psychological, brain, and academic differences?

These findings are specific to when people multitask with multiple media streams. However, there are plenty of studies showing that when we learn under conditions of distraction (whether or not media are involved), our learning is shallower and less flexible.

What should I tell my child who is highly confident that she studies better with the TV on in the background?