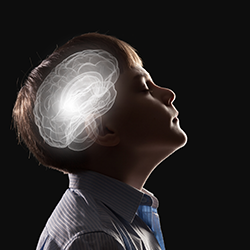 Media used by children have long been thought to have both positive and negative effects on knowledge and cognitive skills. With respect to screen media, most research concerns television, but there has been a growing amount of work on interactive screen media, including computers, gaming consoles, and mobile screen devices. The impact of media use on infants under 2 years of age is different than it is on older children because infants and toddlers are largely not able to comprehend the media content. Screens have a distracting effect on infants and parents and interfere with parent-child interactions. Screen exposure in infancy is associated with poorer language and cognitive development. From about 2 years of age and older, children become increasingly able to comprehend screen media content. As a consequence, educational media can effectively teach knowledge and cognitive skills. A large amount of research has found a positive impact of educational screen media on cognitive development. Entertainment television and computer games, on the other hand, may have a negative impact, especially while children are learning to read. This negative impact is likely due to time displacement of entertainment reading during ages when reading is still difficult. Use of entertainment media with violent content, moreover, is associated with impulsive and aggressive behavior that in turn can create problems in school. Games played on computers and other screen devices can enhance specific cognitive skills if successful game play teaches and exercises those skills. Overall, screen media have both positive and negative effects on cognitive development depending on children’s age and the type of content consumed.

Infants under about 2 years of age learn little from baby videos. Time spent with screen media takes away from valuable time spent playing with physical toys and social interactions leading to poorer language and cognitive development. There is very little research on the effects of touch screen apps on cognition and learning in infants, so we do not yet know whether there may be positive or negative effects of using them.

Is reading development influenced by TV and computer games?

Educational programs and games can increase children’s interest in reading and also teach valuable literacy skills. Large amounts of TV viewing during the years when children are learning to read, however, are associated with poorer reading achievement.

Yes. Numerous experiments have shown that young adults can acquire increases in particular attentional, spatial, and memory skills from playing computer games that emphasize those skills. There is some evidence that this finding applies to children as well.