The Cognition Crisis: The Perils and Promise of Technology and the Brain 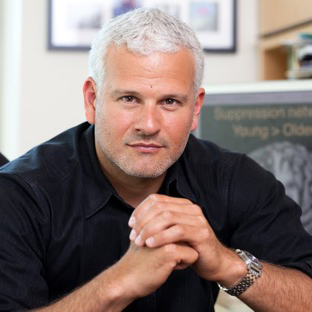 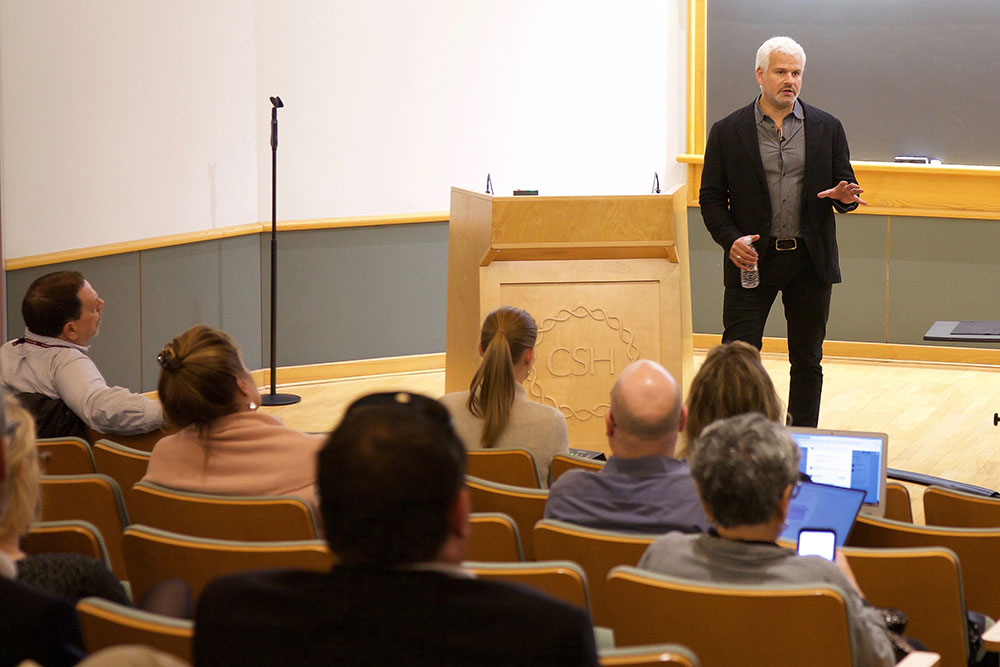 Defining the Goal.  The organizing principle of this talk is that human cognition needs to be enhanced.  This objective encompasses all of human cognition’s constituent abilities, including attention, memory, perception, emotional regulation, decision-making and reasoning, imagination, creativity, empathy and compassion, and wisdom.  The centrality of this purpose is supported by the fact that half a billion people worldwide are debilitated by anxiety, depression, attention deficits, and memory disorders. Data suggest that these symptoms, which have many causes, are on the rise (especially among children).  This cognition crisis rivals the world’s climate change and energy challenges in importance, despite the fact that educational institutions should be cultivating the cognitive development of healthy minds and that medicine and mental health services should be mitigating peoples’ cognitive deficits.

Five Pervasive Problems.  Five problems challenge both the educational and medical establishments with respect to cognitive advancement.  The first is assessment. Physicians don’t know what’s going on inside their patients’ brains. (Advanced functional brain imaging utilized in lab settings is not being deployed in clinical settings.)  Schools fail to assess children to establish cognitive baselines with which to identify needs for improvement. Assessment generally is reserved for cases where evidence of a development challenge or learning disability already is present.

The second pervasive problem is that both medical and educational interventions are imprecise.  Because medicine cannot precisely target neural networks, the drugs used for that purpose are administered in such high amounts that their side effects are as numerous as their intended effects.  Education is being administered in a similarly imprecise way.

Both systems also suffer from being non-personalized.  Doctors base their advice on large population studies that fail to account for individual differences.  Because people are not uniform – almost no one actually is average – that makes every treatment encounter an experiment.  The same is true in schools. “We still have not personalized the education to the individual developing mind.”

Medicine and education also fall short because many of their practitioners take a unimodal approach.  Neither pills nor schooling alone are likely to be sufficient means of treating, and improving, something as complex as human cognition.

The last of the pervasive problems of medicine and education is that each is an open loop system.  There is a “… long, sloppy, non-quantitative cycle between how we intervene and then how we update the intervention depending on how well it works.”  The effects of medical interventions get assessed subjectively and sporadically, undermining the scientific integrity of the treatment process. In classrooms, the testing process serves to feed children’s advancement through classes and grades without actually updating their comprehension of the tested material.

Addressing the Problems.   Technology challenges our cognitive systems.  Human brains are characterized by strong high-level goal-setting and fundamentally limited cognitive control.  Distraction is the state in which these two attributes interfere with each other. Technology aggravates this state; however, it also may allow us to correct it (and other deficits to which it never contributed in the first place). The consumerization of a number of technologies (including virtual reality, augmented reality, motion capture, wearable smart physiological recording devices, machine learning, and other artificial intelligence applications) makes this matter timely.  These technologies lend themselves to the delivery of targeted experiences.  Since experience drives neural plasticity, we may be able to harness the brain’s capacity to change in ways that address each individuals’ personal cognitive and behavioral needs. 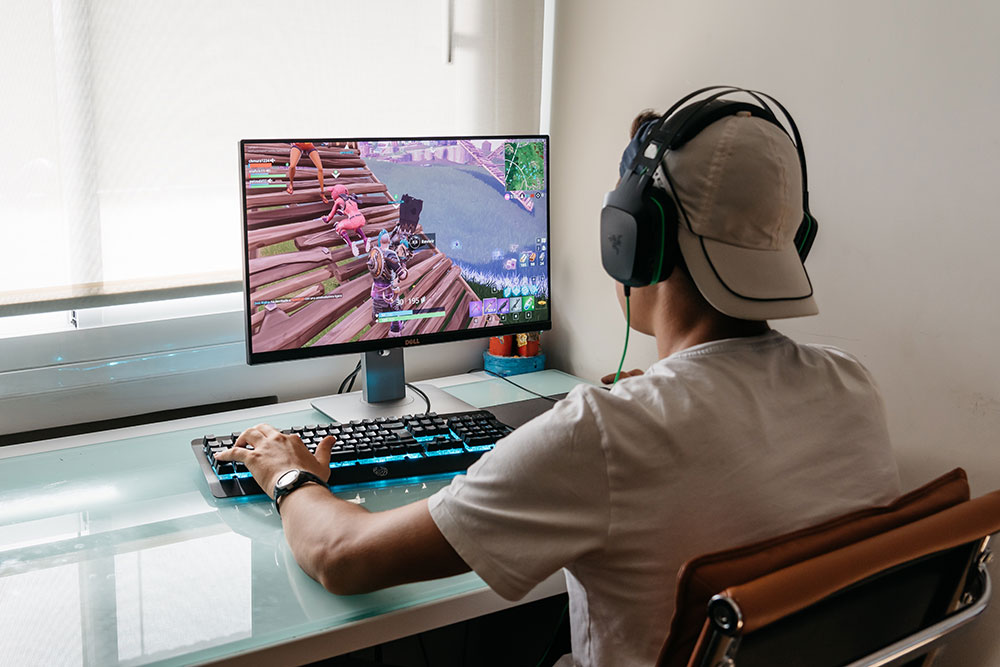 A closed-loop video game can be a cognitive advancement tool.  Behavior generates performance metrics in near-real-time. The data informs adjustments to the game, to adapt to personalize the gaming experience (for example, to prevent the player from being frustrated by failure or bored by inadequate challenges).  Player data also can be used to trigger rewards and other forms of feedback. Game designers exploit these processes to cultivate player immersion.  They also can be used to target neural networks. The concept is simple: “You engage in a specific experience and your brain activates selectively.”  That’s a result never achieved with a pharmaceutical intervention.

This type of closed-loop experience applies pressure to the neural network, the plasticity of which allows it to change over time.  The extent of the data generated by a gaming experiences expands as the game incorporates even currently available motion capture and physical recording technologies.  These feed additional personal data into the closed-loop system, such as emotional responses, heart rate, and body movements.  With each cycle of action, assessment, and adjustment, the software acquires a deeper and more comprehensive understanding of the player. Virtual reality and augmented reality create opportunities to reflect that understanding in increasing realistic environments.  Factor in advances in machine learning and artificial intelligence, and a picture emerges of a truly integrated, multimodal closed-loop system.  It constitutes a system of artificial intelligence to drive systems that promote human intelligence.  It doesn’t exist yet, but it is where we’re headed.

This paradigm emerged from the development of the game Neuroracer ten years ago.  Using both behavioral and neural measures of players’ multitasking, researchers showed that performance declined with age.  When older adults played the game for a month, however, their performance rose to the level of 20-year-olds. The study also confirmed that, because different aspects of cognitive control shared certain neural networks, the benefits demonstrated by improved game play transferred outside of the game.  This was reflected in players’ improved working memory for faces and sustained attention. Comparisons with control groups revealed that interference resolution challenges were the game element responsible for those improvements. These findings were replicated in older adults, and in children (especially with attention deficits).

This technology is working its way through clinical trials intended to validate its safety and efficacy to the point where it can be used for treatment.  Just as pharmaceutical medicine delivers molecular treatments, this type of game will deliver an experiential treatment. Among other things, it’s being tested as a treatment for numerous disorders (including autism, PTSD, Traumatic Brain Injury, anxiety, depression, Alzheimer’s Disease, multiple sclerosis, and memory and aging).  A multi-site, double-blind, randomized, placebo-controlled Phase 3 trial for pediatric ADHD was recently completed – the first of its kind for a video game.  That trial reached its primary outcome measure. The game used in that trial is under consideration by the FDA to become the first to be approved for marketing as a medical device. 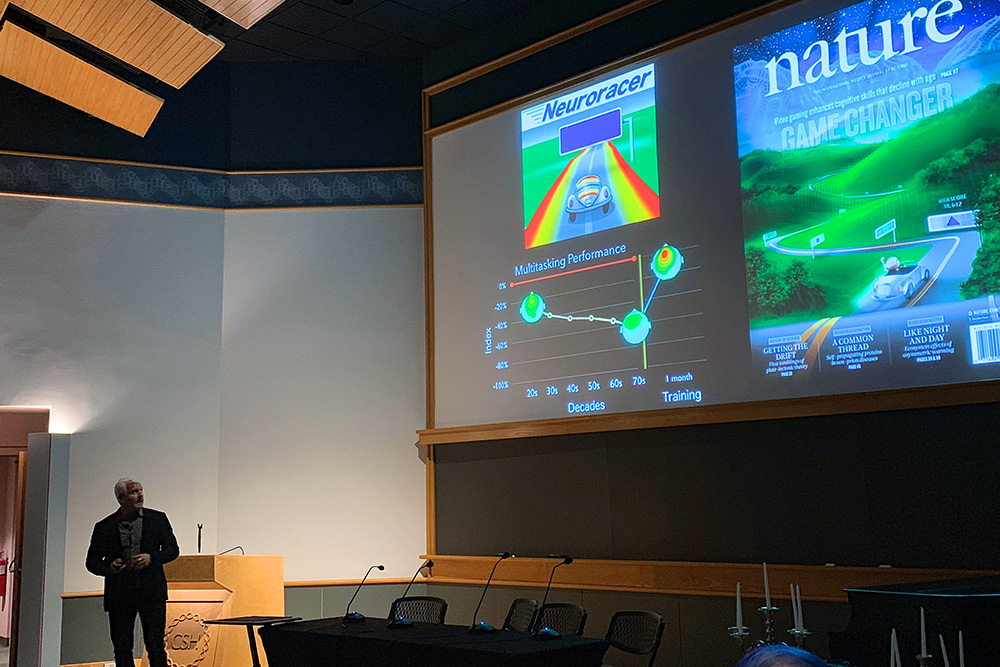 New Focus of the Gazzaley Lab.  The Gazzaley Lab at UCSF transformed into Neuroscape and switched its focus from basic cognitive neuroscience to bridging the gap between neuroscience and technology.  That work includes projects on mobile and wireless technologies (and more particularly, on aspects ranging from accessibility and affordability to physiological recording).  Another project is a game that teaches meditation principles. On the assessment side, the lab’s Adaptive Cognitive Evaluation (“ACE”) is a game-style module-based app that uses closed-loop algorithms, rapidly, to sample cognitive abilities.  The tasks involved are not new, but the adaptive aspect is. Melina Uncapher, PhD led a trial deployment of ACE to 1200 students (ages 8-12) over two years.  The objective of that trial was to identify relationships between cognitive abilities and standard academic metrics, and to generate cognitive profiles (with actionable targets) for each student.  Neuroscape also is working on virtual reality, multi-sensory immersion, and motion capture. It is building games that target cognition. They incorporate efforts in art, music, story, and multiple award cycles.

Having built all of these games, Neuroscape is now pivoting back to conducting clinical trials.  Its evaluative methods include MRI, functional and structural EEG, stress testing, and blood analysis for hormone levels, inflammatory markers, and telomere length.  The neural imaging is generating data on both activity and connectivity in near-real-time. This is shedding light on questions of causation, and identifying specific professes in need of optimization.  Another area of interest is the development of data-based parameters for transcranial alternating current stimulation. The goal of this research is to determine if transfer effects can be accelerated and amplified using this form of stimulation.

Violence.  None of the assessment or treatment games discussed here contain any violent content.  That was a conscious design choice. Some question whether the adrenaline boost and drive that violence generate in players could contribute to the therapeutic effect of some consumer games, but this research team decided that it could create sufficiently deep reward structures in other ways.

Addiction and Displacement of Healthy Behaviors. The addictive (or, at least, high-dependency) nature of gaming is a concern with using games for assessment and treatment.   So is the displacement of such healthy behaviors as exposure to nature, physical exercise, and face-to-face contact. To anticipate and mitigate these problems, the therapeutic game now under FDA consideration contains algorithms that limit play to 30 minutes a day, five days a week.  It not only prevents excessive play, but also monitors compliance. This is an advantage over pharmaceutical therapy. 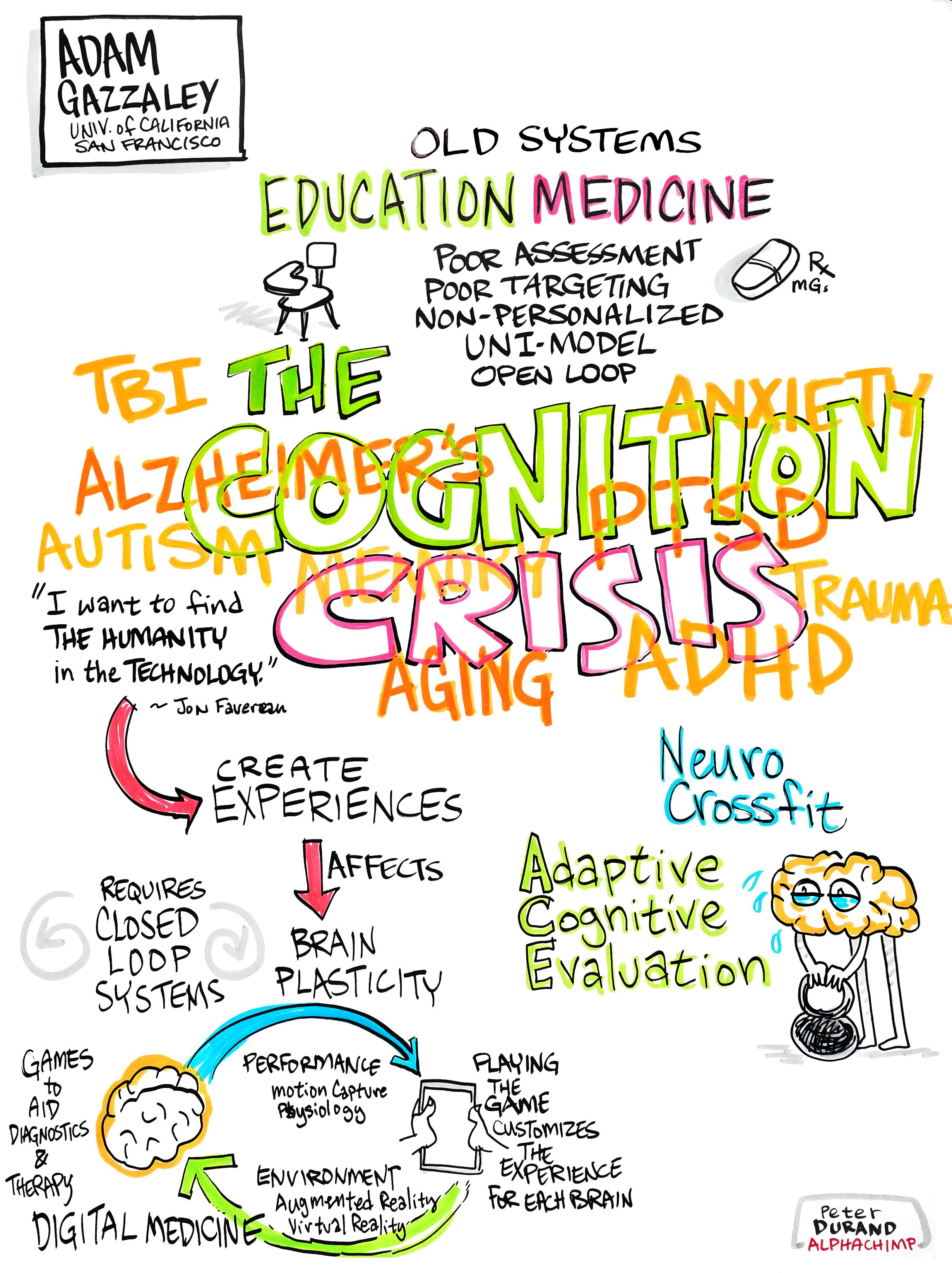 Audience Question: What kind of reinforcement schedule does Dr. Gazzaley’s therapeutic video game employ? Variable ratio? Continuous? Does it vary based on how much experience the player has or the kinds of problems that the player is having?

Answer: What the player is being advanced on is not performance improvements in any single task, but how each of the two tasks relates to the challenge that’s going on in the other one.

Audience Question: How do study outcomes in pediatric ADHD trials, as measured by TOVA scores, relate to real-world functioning?

Answer: The pediatric ADHD video game trial showed a high contextual transfer of attention from the sensory rich, high challenge task in the game to a boring, sustained attention task.  Other behavioral outcome measures typically used in stimulant research studies showed improvement in both students who used the trial game and students who used the control game.

Audience Question: How does this technology and video games fit in with other things like medication, educational accommodations, or parent training?

Answer: This is part of an ecosystem with other treatments.  The Phase 3 trial did not include any children on ADHD drugs.  The interaction with stimulants is a subject for future research, with the hope that combining both forms of treatment could permit lower dosages and fewer side effects.  The Phase 3 trial established that therapeutic use of the game has minimal side effects (and fewer side effects than the only other approved treatment for pediatric ADHD).  Frustration was the main side effect, deriving from the fact that the game constantly pushes the player. Withdrawal is another.

Answer: Yes.  In a second game, full body motion capture and heart rate monitoring are being combined with cognitive challenges to create a body trainer.  Other versions are being considered to have more efficacy against depression (and especially, geriatric depression). A lot of people treated with depression have a lack of concentration that persists even after they no longer feel helpless or hopeless.  The goals of this version of the game was to improve the attention associated with players’ depression, but it has been found to improve their mood, also.

Audience Question: Has the original Neuroracer game been evaluated for use in preventing neurodegenerative diseases such as Alzheimer’s or Parkinson’s?

Answer: Those studies are being done now, but the game is not available to the public.  Important factors remain unknown, such as the minimum viable dose and the appropriate booster schedule.

The Cognition Crisis: The Perils and Promise of Technology and the Brain from Pamela DellaPietra on Vimeo.