Keeping Pace with Gen Z on Digital Media:
An Inside Perspective 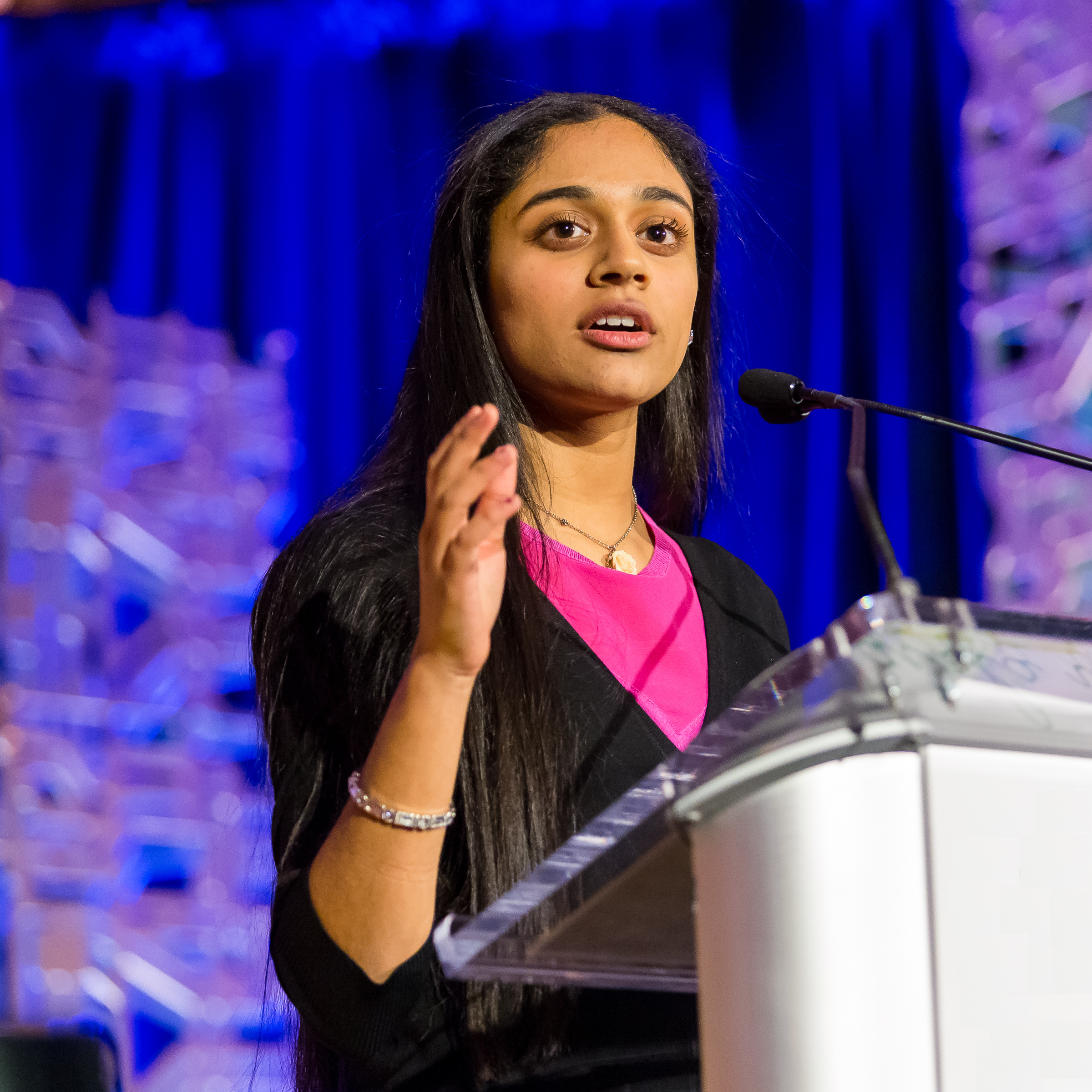 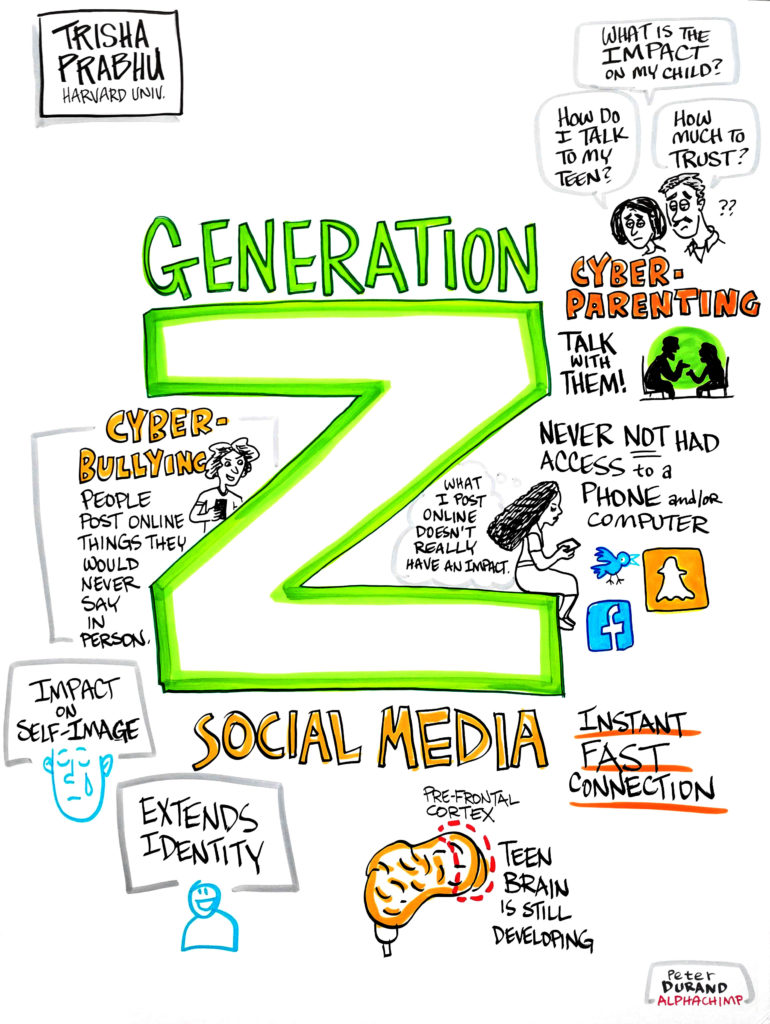 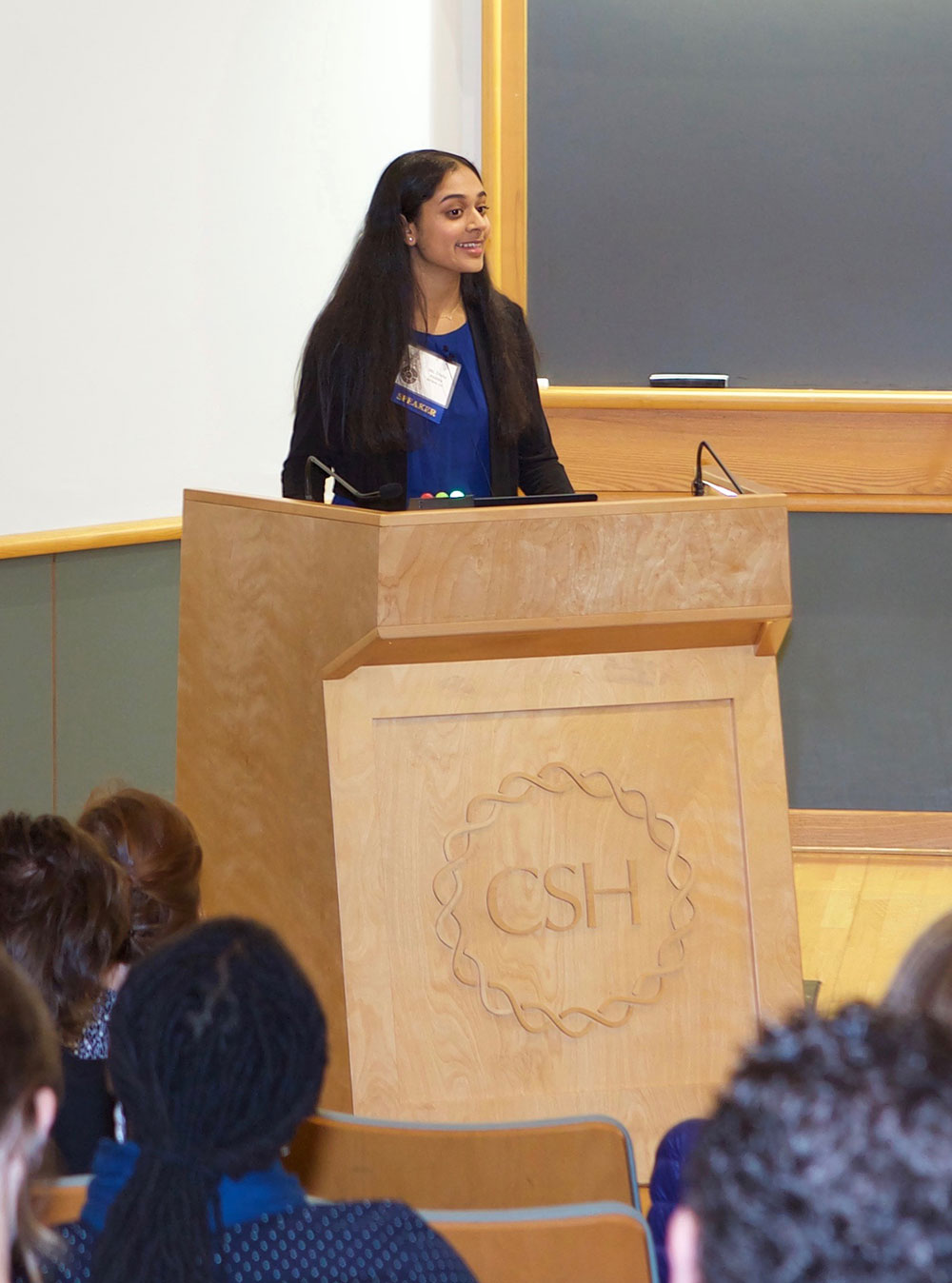 Trisha Prabhu is a first-year undergraduate student at Harvard University.  She presented her generation’s perspective on social media in general and online hate and cyberbullying in particular.  She consciously chose not to employ PowerPoint or other visual aids in order to embrace the challenge of engaging her audience just with conversation.

A Personal and Generational Perspective.  The devices, media, and phenomena that represent change to older generations are familiar childhood companions to today’s young adults. Ms. Prabhu got her first phone at age five.  She’s never known life without a laptop and never looked up words in a printed dictionary.  Her generation’s perspective on digital media is, “Technology is integrated into almost every aspect of my life – the way I communicate with people, the way that I study, the way that I research, the way that I learn.”

Ms. Prabhu cited a number of statistics to support that assertion.  She mentioned, for example, 78% of 18-24-year-olds are using social media.  Seventy-one percent are using three or more social media platforms. In 2015, Americans ages 13 to 18 said that they use social media for an hour and 11 minutes a day, and “… 54% of 18-year-olds said that their social media use contained references to high-risk behavior, like sexual activity, substance abuse, and violence.”

Ms. Prabhu did not just grow up surrounded by technology.  She also grew up surrounded by bullying.  At age 10 or 11, her hair, wardrobe, race, heritage, family, and home were all targets of peer ridicule.  Later, that bullying concentrated more online. Her tormentors were emboldened by their anonymity. “It was almost like there was this great shield that prevented them from feeling bad when they were posting these messages.”

This young adult has moved beyond her victimization, but some of her contemporaries have not.  Some have developed severe mental health issues or sought therapy because of online bullying. Others have taken their own lives. 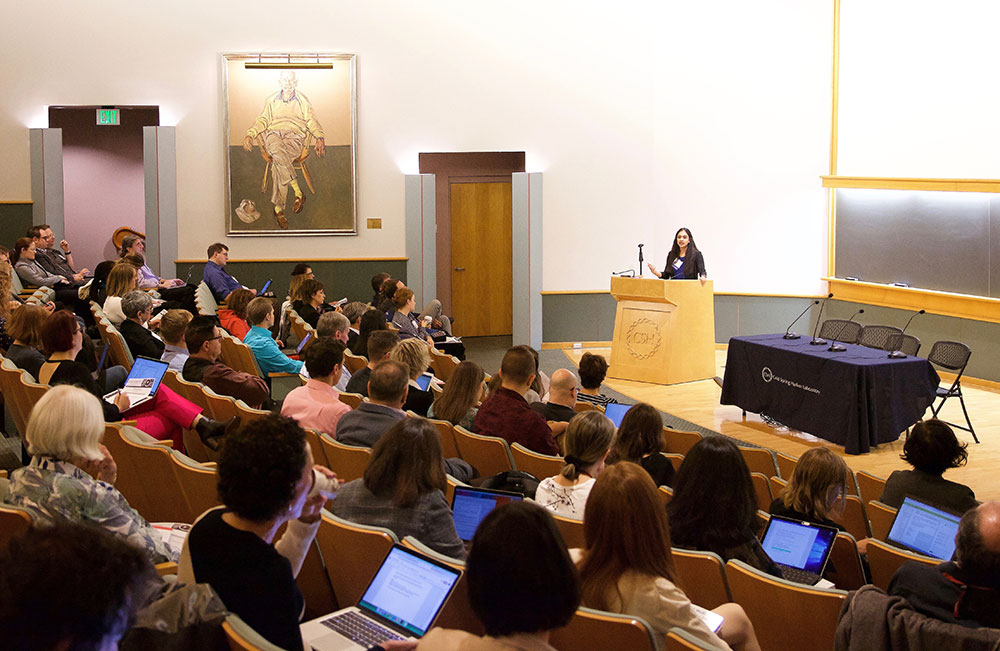 Tech’s Appeal for Teens.  Three aspects of technology particularly appeal to teens.  The first is that this age group is used to technology-driven, instant gratification.  Social media platforms offer immediate, relatively effortless social rewards (as illustrated by Ms. Prabhu’s story of a friend who cancelled a lunch date, and substituted a Facetime interaction, to avoid the need to get out of bed.)  “We live in a world where that speed has always been fast, so we expect that it’s always going to be fast, and that’s what we prefer to have in our social experiences.”

A second reason for teens’ affection for technology is its role in keeping them informed of current events.  In civic and cultural life as in their relationships, they want to know what’s happening as it’s happening. Media that update constantly (such as Snapchat and Instagram) satisfy that need.

The third key dimension of the teen/tech connection is that social media provide outlets for  creative self-expression. For Ms. Prabhu, “… putting out a funny quote isn’t just about getting a few laughs.  It’s also a part of building my identity as a person and what I present to other people.”

These three attractors make it difficult to get teens “… to suddenly decide that it’s important to put down a phone, or important to have a conversation, or that empathy and being able to really connect with someone is something you can only get when you’re speaking to someone [in person].  That is something that may seem very obvious to a lot of adults, but for a lot of teens it’s not something we particularly think about, because we just don’t know any different.”

Why Teens Encounter Inappropriate or Hurtful Content Online. Adolescent brain development may explain why teens encounter destructive content online.  The brain develops at this age from back to front. The prefrontal cortex (responsible for decision-making and impulse control) doesn’t fully develop until the mid-20s.  That means that teens are getting technology, and the responsibility that comes with it, before they’re neurologically equipped to effectively consider the consequences of their decisions.  Ms. Prabhu and her peers “… don’t really understand the significance of what [they’re] posting online.”

A numbing phenomenon also may be at work.  Citing a Pew poll, Ms. Prabhu observed that 45% of teenagers use the Internet constantly.  She hypothesized that “… when you’re on something all the time, pretty quickly it loses significance for you.”  That may explain a generational difference in how social media messaging is perceived.  Young adults may feel that their social media messages are such small contributions to such a vast and shapeless “abyss” that no one message – or person – is of any consequence.  The frequency and ubiquity of online communications obscures their actual impact. 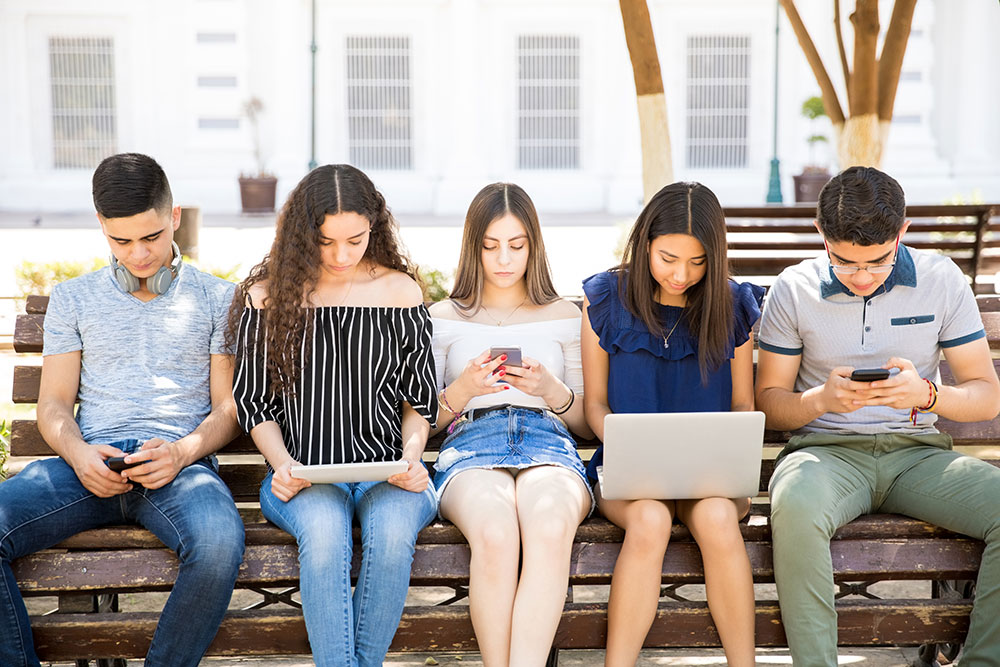 Emotional Wellbeing and Social Media.  According to Ms. Prabhu, “adolescents overwhelmingly report that social media is a positive contribution in their life, but … those teenagers are individuals who have high social emotional wellbeing.”  The other side of that finding is that some teens with low social emotional wellbeing are struggling with symptoms of depression, sleep disruptions that aggravate their depression, and social anxiety.

This poses a parenting challenge.  The threshold issue is knowing when teens are suffering.  The natural separation between adolescents and their parents during the tween and teen years makes it hard for parents to make that determination.  Children trying to establish their independence hesitate to disclose their vulnerability. As Ms. Prabhu noted, “… it’s not surprising that we find statistics that show anywhere from 75%, to iPhone studies that say that 90%, of young people don’t report online abuse to parents.”

This indicates a need for proactive parenting.  Parents must express articulate limits and expectations for their children’s social media behavior, but also establish that a “safe space” exists for parent-child communications when something goes wrong.  Failure to do this can have tragic consequences. This point is made each time a suicide leaves behind a parent who never knew of his or her child’s online torment.

Proposed Focus for Research.  The research community focuses too much on what teens are experiencing online, and not enough on how those online experiences are affecting their offline lives.  “What’s the impact on their brain, their perceptions, how they feel and think?” Those seeking ways to prevent hate and bullying online deserve credit and support.

Ms. Prabhu’s organization, ReThink, is doing just that.  It distributes an app that delays the dispatch of social media messages.  This gives senders time to reconsider what they’re sending. In partnership with MIT, Google, and others, ReThink found that this simple technique was 93% effective with the 13-18 age group.  This is an example of using technology as a tool to solve a problem that technology created. In the same vein, eliminating social media is impractical, but its dangers can be mitigated through the active promotion of more positive online experiences for teens.  “We cannot expect that teenagers or anyone, frankly, today, is going to put their phone away forever. So how do we work with social media, with these technology platforms, with these digital devices, with the Internet, to try and make it a safer space?”

Concluding Thoughts.  Ms. Prabhu acknowledged that she lacks the scientific credentials and years of professional experience of the people she usually meets at events like this.  On the other hand, she and her contemporaries have spent their entire lives immersed in the phenomena that more conventional experts are struggling to understand.  This is why the research community should engage teens and young adults in conversation.

Keeping Pace with Gen Z on Digital Media: An Inside Perspective Keynote from Pamela DellaPietra on Vimeo.