Imaging the Loss of Free Will in the Addicted Brain: Implications for Gaming and Internet Addictions 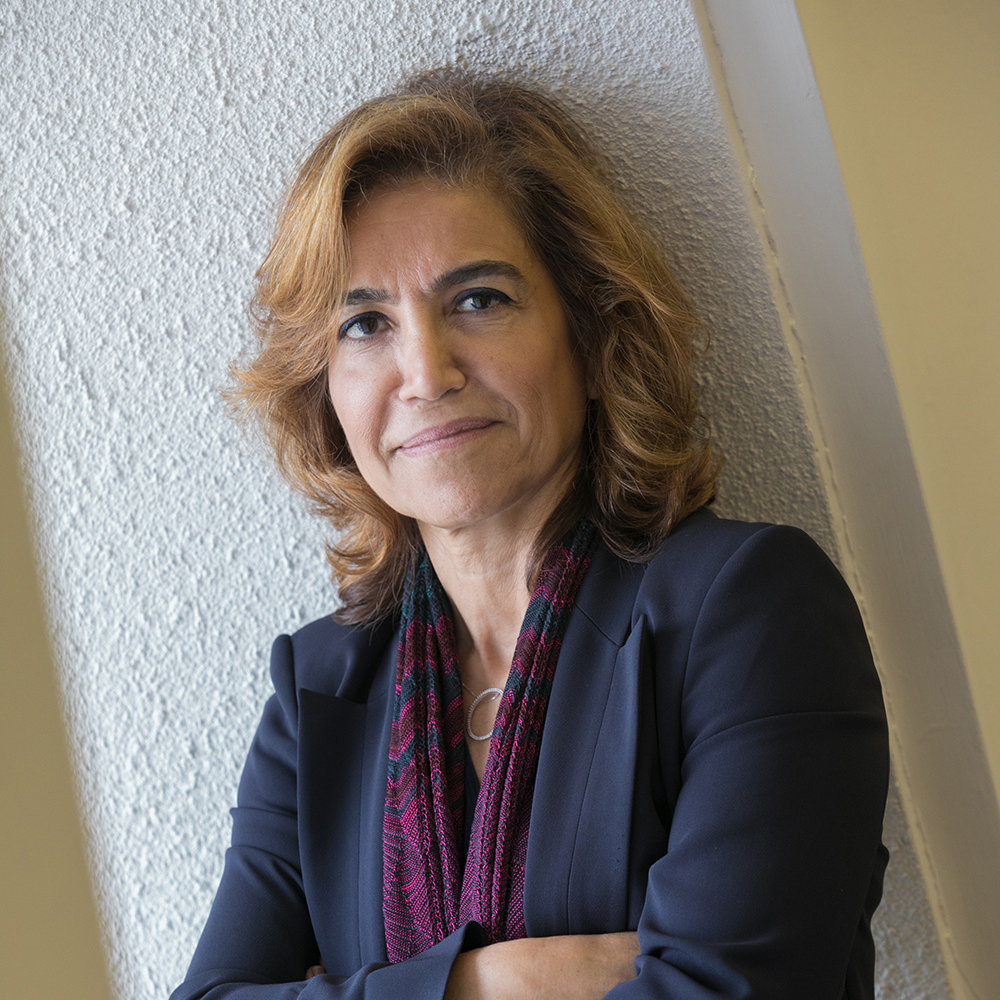 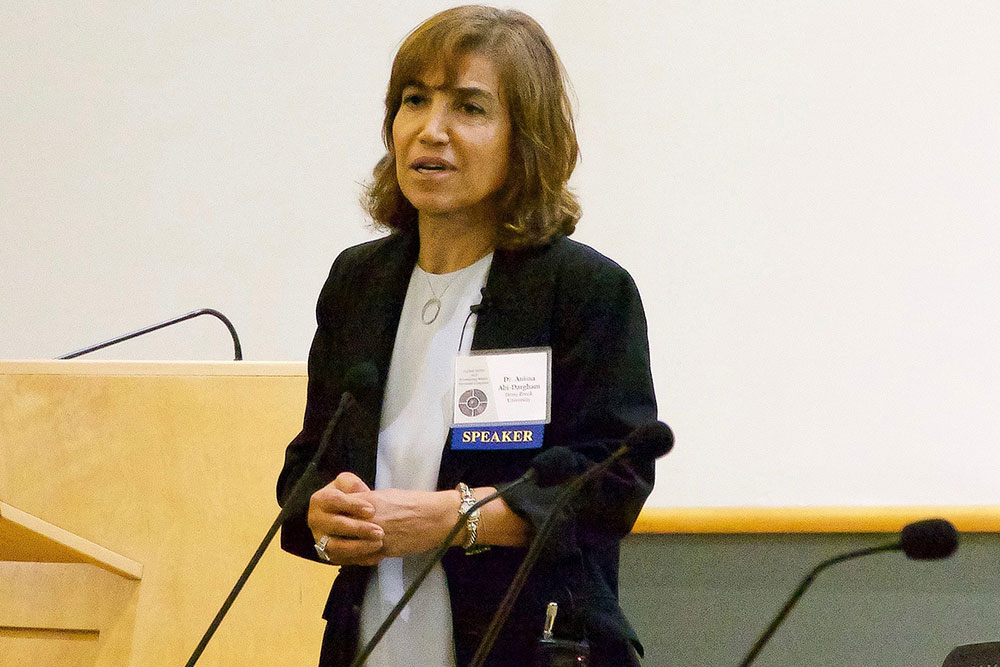 Introduction.  Anissa Abi-Dargham began her talk by describing the disciplinary perspective that she brings to her studies of the addicted brain.  She has principally used Positive Emission Tomography (“PET”) scans to image dopamine in the brain under various conditions.  Her main area of study, schizophrenia, has engaged her with a patient population also affected by drug addiction, so she has studied that phenomenon as well.  She does not study internet gaming, and has not found definitive imaging studies of gaming or other Internet addictions similar to work done in other drug addictions.

The Circuits of the Brain.  The basic structural and functional attributes of the brain include particular circuits relevant to addiction, and these circuits are heavily modulated by dopamine.  We have a reasonably informed appreciation of the complexity and interconnectedness of various brain structures, and the types of information processing associated with them.  The surface of the brain (the cortex) includes specialized regions for emotional, sensory motor, and cognitive (including executive) functions. Each of these connect to deeper structures through discrete circuits, and then back up through loops to the cortex.

Dopamine’s Role in the Brain, Generally.  Dopamine is a chemical substance that modulates all regions of the brain.  An unexpected reward triggers dopamine cells to fire. Then, they start to fire when something in the environment suggests that a reward is coming.  If that reward is better than expected, then excess dopamine gets dumped into the brain, producing happiness or euphoria and a desire for more. If the brain’s expectation of a reward is frustrated – if it is cued to expect something that doesn’t happen – then dopamine production declines and dysphoria follows.  “[People] are always kind of tabulating the difference between what you expect and what happens to you.”  Dopamine’s role in signaling rewards throughout the brain is compounded by the part it plays in regulating cortical circuits that run on other substances. 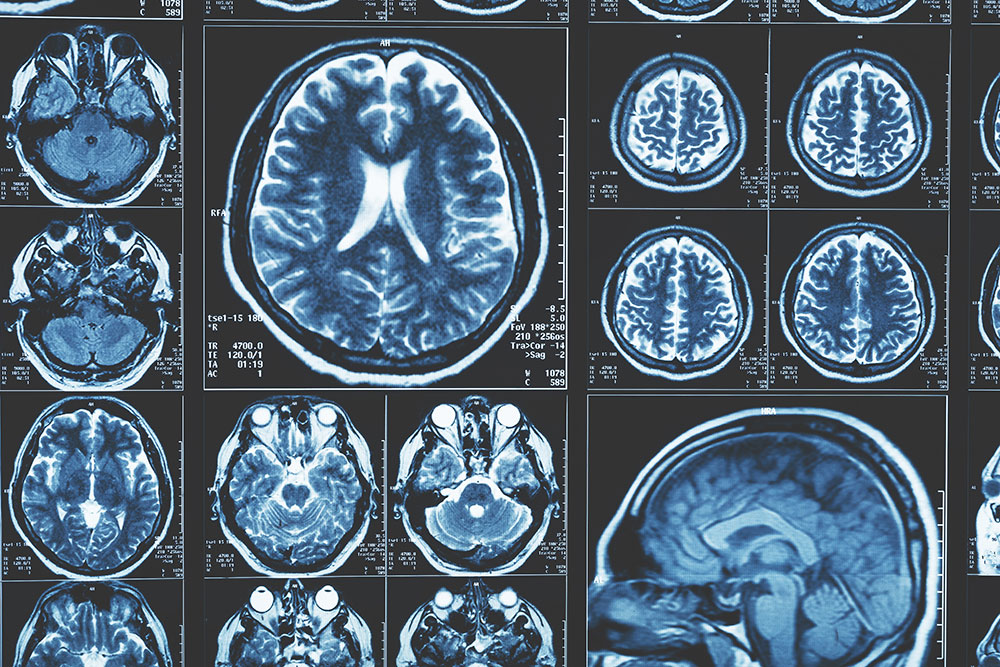 Phases of Addiction.  Behavioral science and psychology provide useful context for the particular neurology of drug addicts’ brains.  The early phase of drug abuse consists of excessive consumption (bingeing), euphoria, relatively mild withdrawal, and a desire to repeat the experience.  As addiction progresses, euphoria is replaced by the alleviation of dysphoria. That is, drug use stops making the addict feel especially good, and just makes him or her feel less bad.  Withdrawal symptoms become more severe, too. They include restlessness, depression, anxiety, and obsession over future drug use. These behavioral changes are associated with changes in addicts’ brain chemistry and circuitry.

Findings from Studies of Addicts’ Brains.  Substantial evidence supports the proposition that drug addiction changes brains.  Cannabis, alcohol, and cocaine users all show dopamine deficits. Cannabis users whose use began before age 18 are particularly susceptible to this effect.  In a follow-up study on cannabis and dopamine, Dr. Abi-Dargham found further evidence of an association between drug dependence and a dopamine release deficit.  “… [L]ess dopamine release meant more negative symptoms – more inattention, lower working memory capacity, lower probabilistic learning.” Even mild cannabis use lowers dopamine levels and affects cognitive functions and processing of reward functions.  “… [I]f you use enough drugs, you end up with a brain that has no dopamine … [T]hat’s probably not a good thing because dopamine is essential for brain functions: signaling an expected reward, fine-tuning cognition in the cortex, and controlling the thalamocortical outputs – including the balance between approach and avoidance – so it’s really controlling key functions and regions in the brain.” 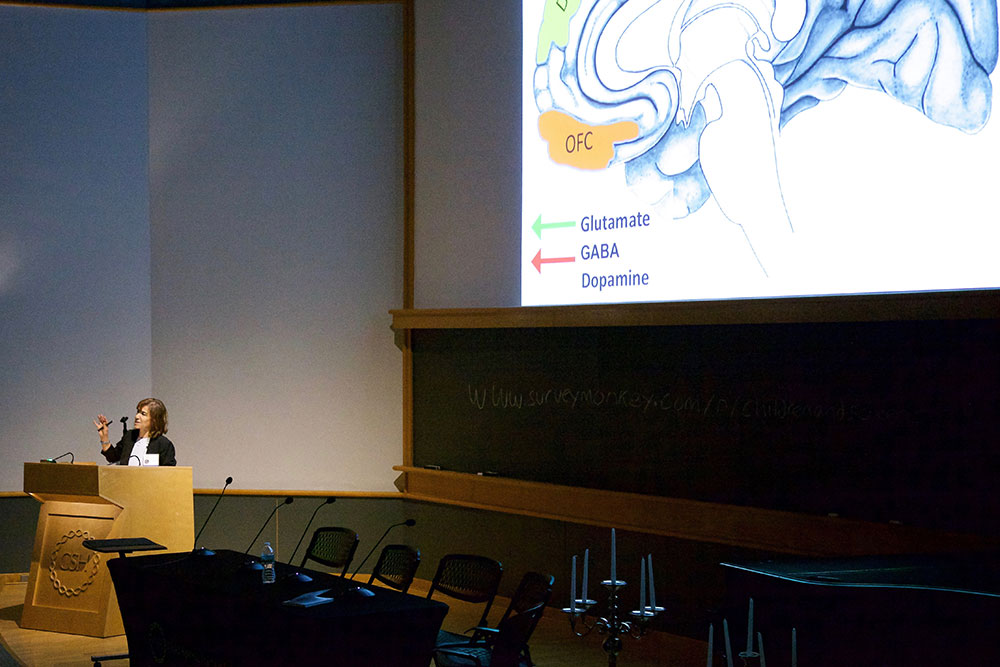 Animal studies by Dr. Peter Kalivas indicate that exposure to these drugs also causes changes to the brain’s use of glutamate, to the synaptic circuitry itself, and to the connections among brain regions that operate through that circuitry.  Magnetic Resonance Spectroscopy literature points to similar concerns with respect to human brains. Acute alcohol use decreases glutamate, while chronic use increases glutamate in some regions of the brain.  “So, dopamine is changing, glutamate is changing, the connectivity is changing.”

Extrapolating Drug Addiction Findings to the Gaming Addiction Context.  “The behavioral cycles are similar across all addictions, making it likely that similar brain systems are involved across different addictions.”  That remains to be confirmed, however. There has been little study of the necessary neuroimaging research on Internet gaming.  The few studies conducted have not used the large samples and transparent methods needed to produce robust results.

Conclusions. Indications are that the effects of addiction are worse in young, developing brains.  More broadly, since any addictive behavior could be accompanied the types of brain changes described here, each such behavior requires neuroimaging research. 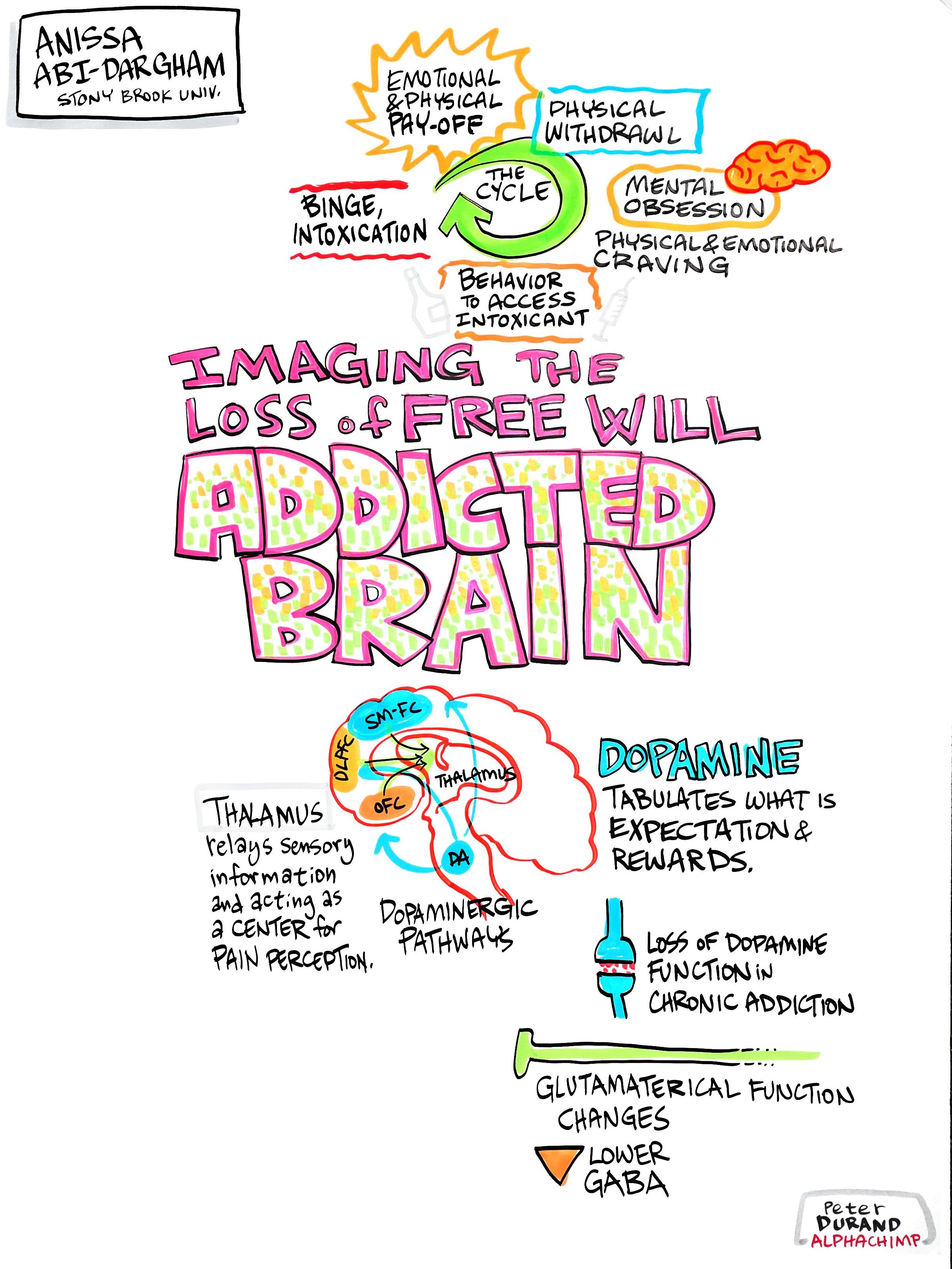 Audience Question: (Dimitri Christakis, MD, MPH) Internet addiction is more like behavioral than pharmacological addictions.  Is there relevant data to be gleaned from gambling addiction studies?

Dr. Abi-Dargham: That is a useful comparison.  Unlike a behavior like gambling, the drugs that an addict takes (as opposed to the condition of addiction) directly affect biological systems, by modifying the levels of chemicals directly.  The literature does not yet include any definitive data (of the type discussed in this talk) from gambling addiction studies.

Audience Question: There’s a 2011 Indiana University School of Medicine study of gaming overuse.  The sample size was small (n=24), and the duration of exposure was limited (20 hours of gaming over two weeks).  Pre- and post-gaming fMRI scans indicated fairly significant changes in the DGM, the dense gray matter of the prefrontal cortex.”  Follow up scans, weeks later, showed some bounce back to baseline.

Dr. Abi-Dargham: Further work is needed, and we can expect that in comparison to drug addiction studies, “… the severity is going to be different and the magnitude of the differences between people who use these or have these problems and people who don’t is going to be much smaller.”  The effects with chronicity may become problematic.

Audience Question: What about the loss of free will to which this talk’s title referred?

Dr. Abi-Dargham: That was intended to refer to the chemical changes that correspond to addicts’ behavioral compulsivity.

Audience Question (Kristie Walsh): Does alcoholism permanently disable the dopamine cycle of the brain, and is there a difference in that regard between developing and adult brains?

Dr. Abi-Dargham: This is unknown. The necessary PET scans cannot be performed on study subjects younger than 18.  In the examples of younger vs. older cannabis users presented in this talk, those subjected were distinguished based on their age at onset of use (rather than age when scanned).  One Nora Volkow study has suggested the possibility of reversing the effects of alcoholism four months after cessation of use.

Dr. Abi-Dargham: The more important question is differential susceptibility.  Addressing it requires answers about what addicts were like before their addictions.  Having that information might create opportunities for timely, effective interventions.  The ABCD study may help in this regard, because it’s designed to look at different indices of brain function, and the effects of drugs, over time.  The Abi-Dargham team is developing a way to use MR imaging – a cheaper alternative to PET scans, and more feasible for longitudinal studies – to scan for a particular dopamine byproduct, neuromelanin.  When validated, this one-biomarker tracking technique will facilitate the study of the before, during, and after phases of addiction.

Audience Question (Dimitri Christakis, MD, MPH): Is legalized cannabis to be worse, better, or the same as alcohol?

Dr. Abi-Dargham: Cigarettes can be added to that equation.  A small amount of cannabis use for an adult who doesn’t “… have issues otherwise” is not a particular worry, but the extent of their risks remains an open question.  Young kids whose parents’ consumption of cannabis normalizes that behavior are of greater concern. “[T]he data is convincing that this is going to affect their brain development.”

Imaging the Loss of Free Will in the Addicted Brain: Implications for Gaming and Internet Addictions Keynote from Pamela DellaPietra on Vimeo.