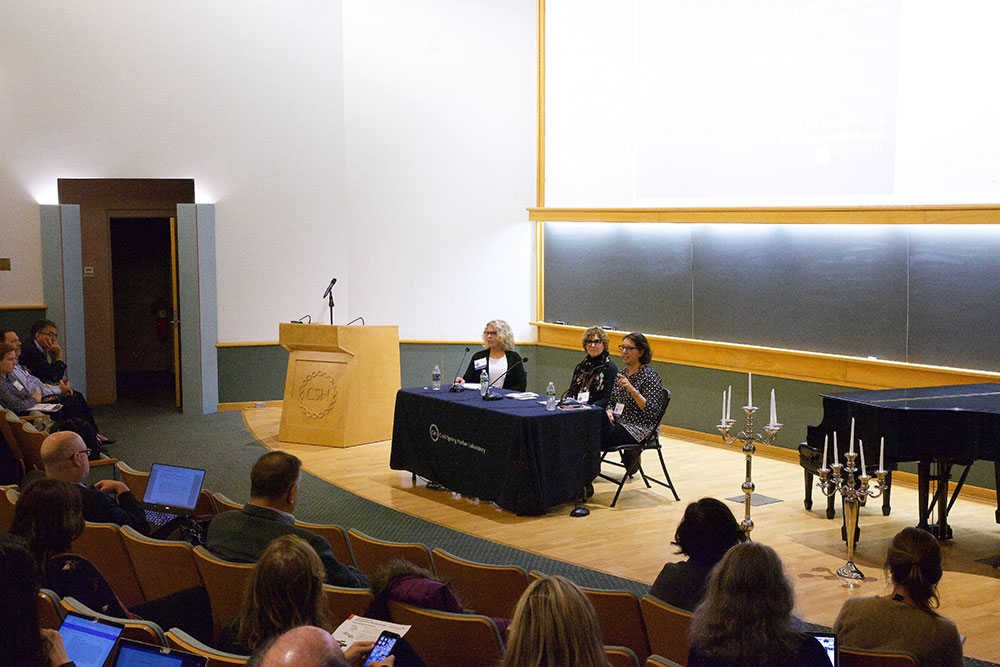 Ms. Rideout: A national, representative probability survey of US teens and young adults (ages 14-22) was conducted in 2018.  Among other things, it collected information on the use of digital technologies for health information. This survey was sponsored by Hope Lab and Wellbeing Trust (two nonprofits that work on mental wellbeing among adolescents and young adults).  It showed that 87% of those surveyed have gone online specifically to find health information. Fitness and exercise were extremely popular topics, but there was substantial search for information on such mental wellbeing topics such as stress, anxiety, and depression.  Other popular areas of inquiry included reproductive health, drug and alcohol abuse, and (for approximately 25% of respondents) sleep disorders.

The online methodology used in this survey allowed the investigators to ask participants follow-up questions.  This yielded a substantial volume of additional information about the context and content of online health information inquiries.

Two-thirds of those surveyed reported having a health-related mobile app at some time.  Some, but not all, of these apps were pre-installed on the phones. Fitness and nutrition were the most common categories.  Meditation apps and sleep and period trackers were popular also. So, too, was the broad category of “mindfulness” and mood management.

Given that millions of young people are turning to digital media resources for health information, how capable are they of understanding, evaluating, and assessing that information?

Dr. Manganello:  Health literacy is the ability to obtain, understand, and analyze health information, to communicate about it, and to navigate healthcare systems.  It incorporates media, digital, computer, and information literacies. As defined by Norman and Skinner in 2006, “e-health literacy” as the ability to seek, find, understand, and appropriately use online health information sources.  The original e-health literacy measurement tool consisted of eight Internet-focused questions. The move to Web 2.0, and the broad adoption of social media, interactive tools, mobile apps, and smart phones necessitated a new way to assess e-health literacy.  A more comprehensive measurement tool was published recently, but it’s still under development.

It’s hard to keep track of how best to measure this skill. In focus groups, young adults (ages 18-24) say that they feel skilled in this area.  In fact, they’re struggling with the more sophisticated levels of information analysis. They’re questioning everything they see. This defines a need for next-level interventions.  We need a way to teach the people how to make sense, and make appropriate and effective use, of the health information to which technology gives them access. 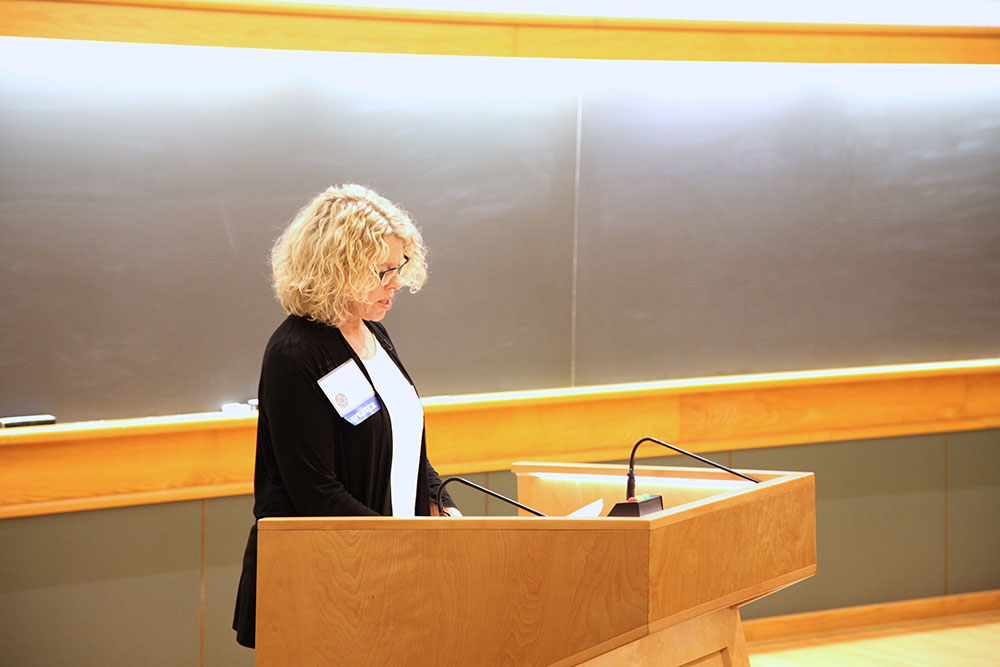 Dr. Manganello: The eHEALS scale uses self-reporting on comfort level with using and analyzing health information on the Internet.  That’s the basic tool. It’s widely reviewed. (What’s more important is to think about what you’re looking at. The eHEALS scale won’t capture app use, for example.  The new scale – the Digital Health Literacy Toolkit – incorporates different scales that relate to different types of use. It hasn’t been used a lot yet, so it’s hard to comment on how well it does that.

Ms. Rideout: How important is it to assess the overall online environment to which young people are being exposed, and the presence and influence of corporate interests within that environment?

Dr. Emery: It’s important.  In the past, we’ve only measured exposure to social marketing campaigns as an indicator of behavioral influences?  Now we’ve got exposure to campaign messaging, individual search behaviors, and social sharing of information. It’s hard to understand the independent and related effects of all those things.

Ms. Rideout: How does vaping illustrate this? 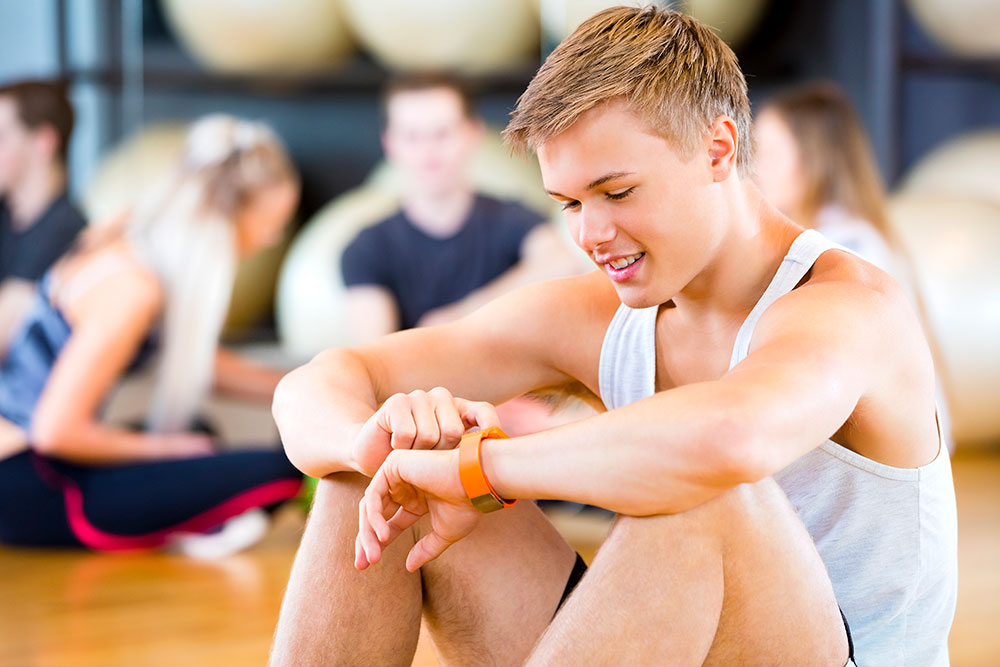 Dr. Emery: Five years ago, there were about five million Twitter message a year about vaping, from about a million separate accounts.  At that time, the vast majority of that messaging was commercial. The mix between promotional content and authentic consumer content has changed over time.  Advertising works. Now, there are more individuals repeating advertisers’ messages about the health effects, appealing flavors, and pleasures associated with vaping.  A chart of messaging about the Juul vaping brand, over about 4 or 5 months in 2017, looks like a hockey stick – exponential growth.

Ms. Rideout: Have health literacy measures caught up to the kind of content to which kids are exposed?

Dr. Manganello: We are looking for better ways to understand the current youth media environment and measure what kids are doing within it.  Their experiences are very individualized. This complicates the challenge of assessing what information they're actually exposed to, whether they’re paying attention, and whether they’re actually being moved to action by that information.  In this arena, corporate interests and celebrity influencers have more resources (and larger audiences) than public health organizations. Kids generally aren’t following their health departments’ websites. Millions of them are liking Justin Bieber and Pepsi. 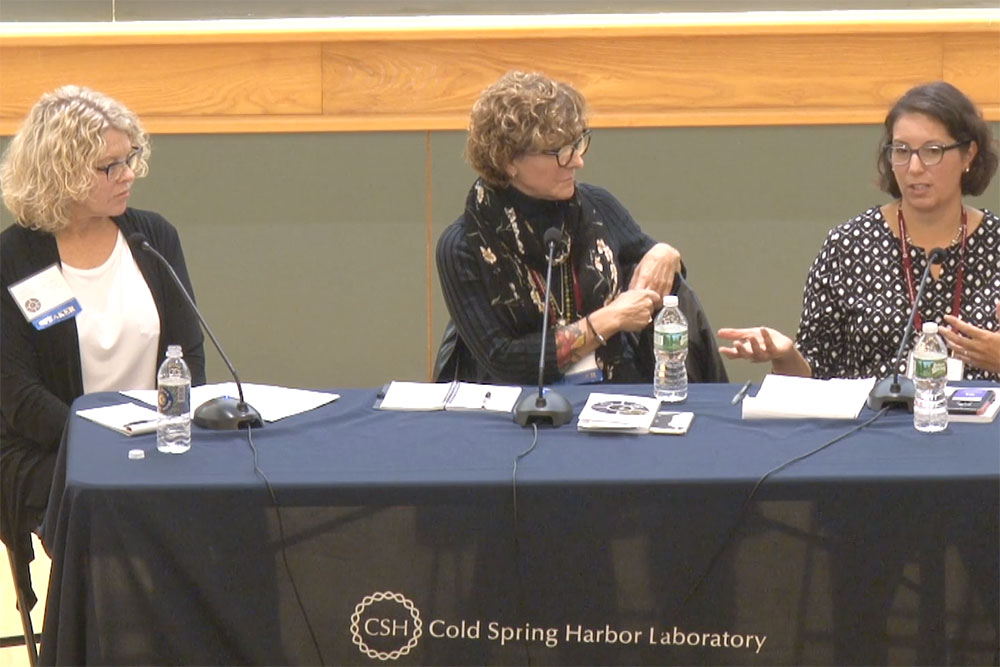 Dr. Emery: They differ substantially.  Some employ minimal messaging.  Others make sophisticated use of social marketing communities (for example, in conjunction with youth-salient cultural and media events). There’s substantial evidence that Truth Campaign and the Centers for Disease Control’s “Tips from Former Smokers” campaign have been effective.  Even though placing an ad on Facebook is relatively cheap, planning and conducting a high-end campaign is not. It’s impossible to level the playing field. We need to emphasize media literacy – to help kids and adults distinguish among authentic content, commercial content, and bots.

The story of California’s “Still Blowing Smoke” anti-vaping campaign illustrates the problem.  Within 24 hours after its launch, search engine optimization crashed. A nearly identical, “mirror” campaign called “Not Blowing Smoke” took over the search engine optimization process.  It was full of conspiracy theories, and used familiar tobacco industry-style tactics to introduce doubt about the purposes of the actual public health campaign. The reach of this pro-vaping counter-strike was relatively narrow – mostly, among vaping advocates talking to each other – but the character of the event alarmed the tobacco control community. 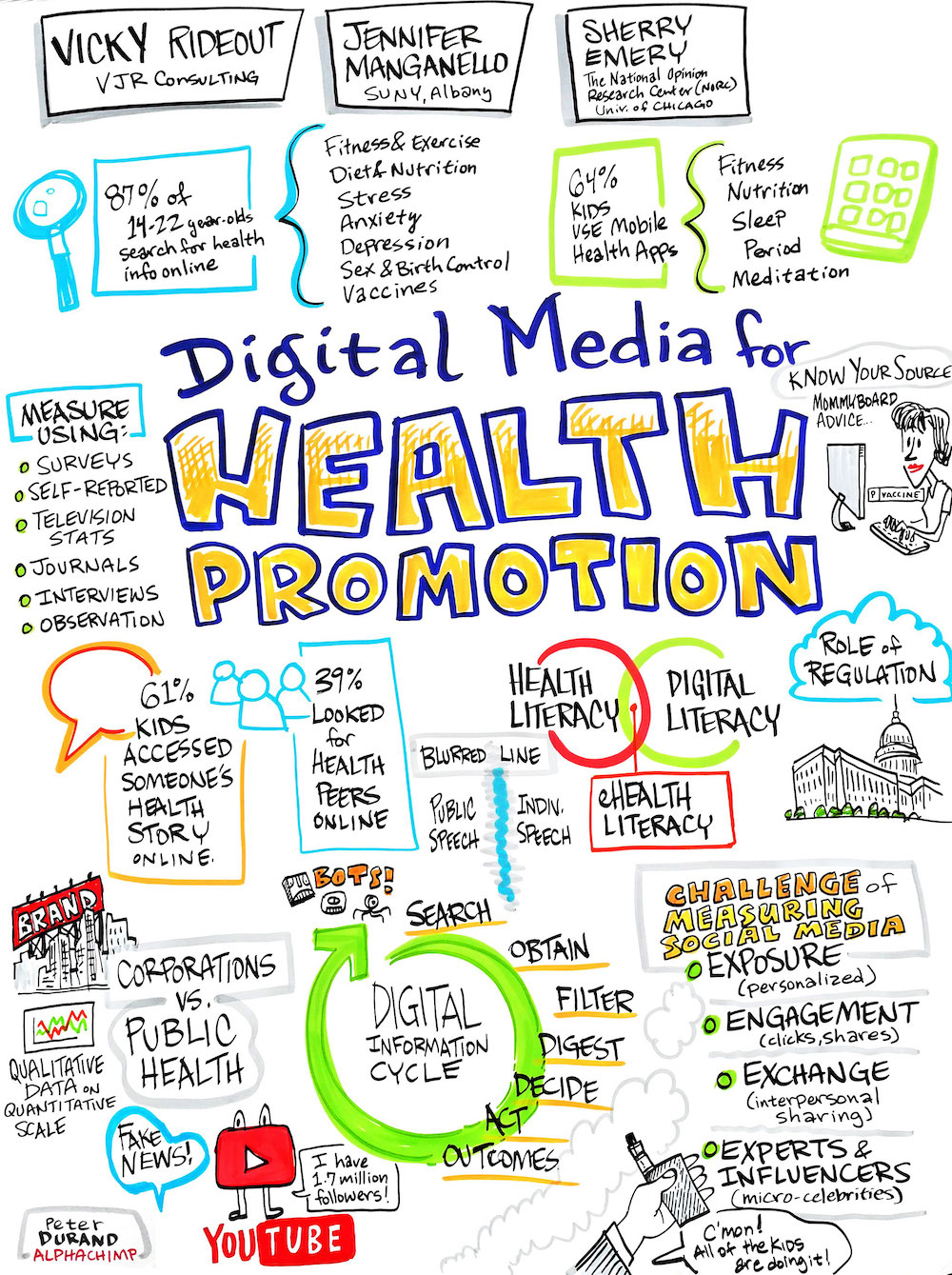 Dr. Emery: Definitely.  That's true for both national celebrities and YouTube celebrities with particular appeal to adolescents.  You can see that from the responses to those campaigns on social media.

Audience Question: Is it possible to time data on digital health information behaviors (for example, to see how many people are searching Google about the same topic at the same time)?  There’s also potentially useful information to be had from existing efforts in population and income dynamics studies, which include data on media use and may also provide valuable context.

Dr. Manganello: The Fragile Families study doesn’t have a specific health literacy measure, but does have other measures that can serve as proxies for that.  There’s also the HINTS data set out of the National Cancer Institute that contains a lot of health communication information, but it’s a survey of adults (rather than children).  Why not use something as a proxy measure, then try to develop ways to extract what’s relevant from it? This field needs to be methodologically creative.

Dr. Emery: Neither social media data nor search data stand alone.  We can’t make sense of them. Survey data are vulnerable when you use them alone, too, because how people recall what they’ve done is determined by their own interest in salience.  This is the case for taking a mixed methods approach.

Audience Question: In addition to education, what’s the appropriate role for regulation?

Dr. Manganello: Substituting something like alcohol for Internet use in the chart seems likely to produce the same U-shaped curve. This speaks to the broadly applicable concept of moderation.

Dr. Emery: The researched presented here statistically accounted for those factors as much as possible, but they matter.

Audience Question: In addition to education, what’s the appropriate role for regulation?

Dr. Manganello: On the individual level, we can do education and skill building.  On an interpersonal level, we can train providers around things like social media and health literacy, and they can talk to their patients.  Intervention on the policy level is another component of a comprehensive, ecological approach to public health. So is community-level engagement, through such institutions as schools and libraries.

Dr. Emery: The regulatory environment is critically important, but there’s a blurry line between commercial content (which can be regulated) and individual expression (which is hard to measure and attribute in social media).  We need to know more about the effects of interpersonal, commercial, and intentionally influential communications, who’s generating and distributing them, and to what effect. Critical thinking about this can help regulators understand what distinctions they can and should draw.  There is precedent for this, but not in the social media context.

Audience Question (Vicky Rideout, MA): Some researchers are using search term data to determine what young people are thinking about.  Is that approach sound?

Dr. Emery: Google search data is good for understanding product use or brand placement.    It’s less good for understanding behavior and opinion. These are qualitative data on a quantitative scale, and filtering out off-topic uses of superficially relevant terms is both crucially important and very difficult.  You need computational tools to help you digest these data and make inferences from them. If you don’t carefully measure and validate the quality of your data, then you get misleading results. In this context, it’s important to remember that people on social media generally, and kids in particular, don’t use the same vocabulary as middle-aged, highly educated researchers do.

Audience Question (Cliff Sussman, MD): A lot of the information being shared on “mom forums” is misleading health information, based on parents’ own anecdotal experiences, that’s imbued with authority.  There also are Internet-based scams that target parents. What’s being done about this phenomenon?

Dr. Emery: You can’t regulate what people say, even if they say stupid things, but you can identify which influencers have financial ties to industry.  There are forums for everything, and each of them has commercial entities pushing content that’s mostly indistinguishable from interpersonal communication.  We need research to reveal these commercial influences, and we need to challenge regulators to keep up with this phenomenon.

Audience Question (Leslie Snyder, PhD): The most easily accessible and understandable stuff is commercially oriented, but you really have to dig to discover its sources.  Most people aren’t going to do that. There’s also a sleeper effect. Information that we’re encountering is getting encoded, but not the objections we had to its source when we initially formed the memory.  There are multiple layers of conundrum. Are there any health literacy/media literacy efforts that have worked to combat these issues of really bad, biased information sources?

Audience Question (Bernard Fuemmeler, PhD, MPH): We know that bots have been used maliciously, but have we thought through the ethics of using bots to do public health media campaigns?

Dr. Emery: Probably not.  As a field, we need to think carefully about the ethics of privacy, identity, and identity protection.  We need to establish a higher standard for ourselves (without handicapping ourselves further).