What Does Science Tell Us About Violent Video Games? 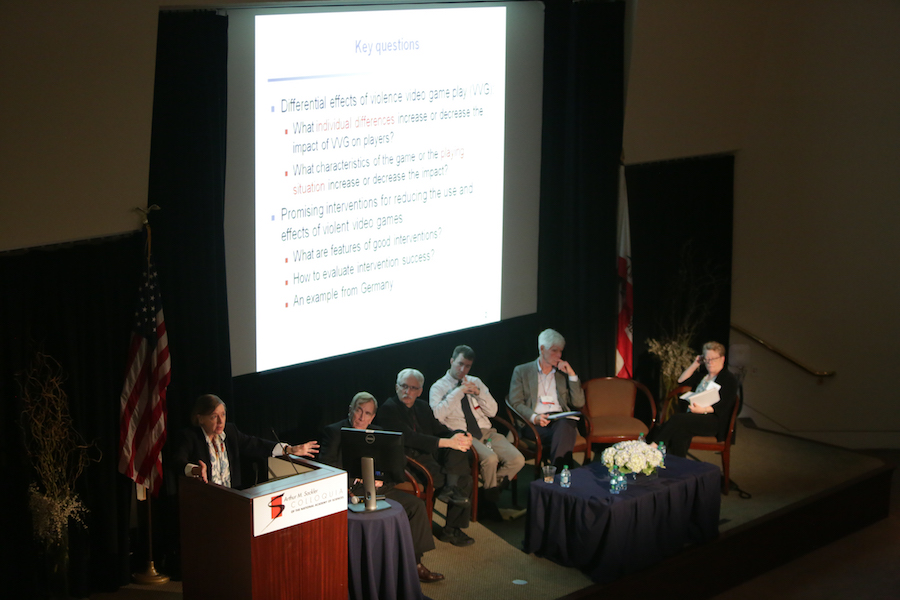 We basically know the psychology of how violence begets violence. Violence produces changes in a variety of mediating social cognitions. Those cognitions, when primed, lead to increased risk for behaving violently. There is little psychological reason to distinguish between exposure to video game violence, exposure to other media violence, and exposure to violence in the real world. They have very similar psychological effects.

Do violent video games increase the risk of aggressive behavior by the player immediately after s/he plays the game?  How long, and how intense is this effect, and how is it different when the exposure is habitual?  There is an overwhelming consensus that says playing violent video games increases aggressive behavior.  Regardless of research methods, and regardless of whether the violent content is passive (TV) or interactive (games), exposure to violent media content increases aggressive behaviors (that is, behaviors intended to harm people who do not want to be harmed).

The recent APA Task Force conservatively reserved judgment on the impact of exposure to violent media on criminal behavior, but there is substantial evidence that the established effects associated with this influence exist along a continuum from trivial to criminal. Brief exposure is associated with short-term effects. Repeated exposure makes it more likely that aggression persists long after the short-term effect wears off.  The magnitude of these long-term effects for exposure to violent video games on aggressive and violent behavior is comparable to other known risk factors for aggressive and violent behavior and comparable to the effects of well-known risk factors for public health (e.g., exposure to lead, asbestos, and passive cigarette smoke).  The best evidence to date suggests that these effects are very similar across a wide range of cultures. 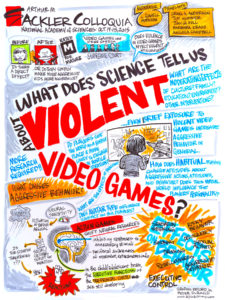 Graphic Illustration – What Does Science Tell Us About Violent Video Games?

The absolute behavioral effects of violent video games may be small, but the serious consequences of increased aggressive or violent behavior justify efforts to mitigate them as we mitigate the other public health threats mentioned above.

What psychological and neurological processes account for the short-term effects of playing violent video games on aggressive behavior? What brain functioning accounts for the immediate increased risk of behaving aggressively? How do we know this?

The brain treats a threat as a high priority stimulus. That triggers the engagement of specific brain regions involved in evaluating and responding to it. Imaging confirms that specific physiological arousal effects persist after playing a violent video game. The response is centered in the amygdala, and inhibits the regulatory role of the prefrontal cortex. Violent video game play also increases visuospatial attention and processing speed. The combined effect – high emotional response and high physiological arousal – heightens the player’s capacity for action while reducing his or her capacity for reflection. This may be thought of as a revision to the player’s “behavioral script”, because it changes the worldview through which he or she processes (and reacts to) subsequent provocations or threats. Disrupted inhibitory and decision-making mechanisms make aggressive behavior more likely. Because adolescents’ prefrontal cortex matures later than their limbic region, they are especially susceptible to these effects.

Despite some scholars’ claims to the contrary, an examination of the key meta-analyses of every published and available unpublished longitudinal studies of effects of playing violent video games on physical aggression reveals no publication bias or “trim-and-fill”. Taken together these meta-analyses show that playing violent video games is a significant risk factor for subsequent aggressive behavior.

Habitual video game players think differently than other people.  They’re more likely to think that aggression is a normative and appropriate behavior in many situations;  they’re more likely to attribute hostile motives to others; and they’re more likely to have a large repertoire of aggressive scripts which they rehearse with aggressive fantasies.  Playing these games teaches aggressive scripts that one acts out in the real world.    Observations of increased sensation-seeking and rule-breaking by habitual violent video game players are consistent with these .    processes. Changes to ways of caused by habitual playing  do more than influence aggressiveness.  They also affect such behaviors as smoking, drinking, risky sex, delinquency, and reckless driving.  Such broader effects appear in longitudinal studies, statistically controlled for prior aggressive behavior.  As was the case above, the absolute effects are small, but comparable to other effects we consider significant for public health.

What moderates the effects on aggression of playing violent games?  What individual differences increase or decrease the risk of increased aggression in the player?

The degree of realism involved in the particular game does seem relevant.  The more realistic the virtual violence, the more it affects the player.   Players’ ability to identify with the characters has a similar effect.  The ability to personalize avatars makes the effect stronger, as does making  the avatar’s race and gender similar to stereotypically aggressive people.

There is some evidence of greater long-term effects on younger players, but little evidence of major gender differences..  National culture (based on comparisons between study subjects in the US and elsewhere) and ethnicity do not seem to be influential moderators of effects. A pre-existing tendency toward aggressive behavior (“trait aggression”) might increase the  susceptibility of youth to being influenced by media violence, but there is not conclusive evidence on this  so far.

What game characteristics increase or decrease the risk?  Are there “inoculating” interventions that can be done to reduce the effects of playing violent video games?  How do we know this?

There are few available intervention studies.  Those few suggest that appropriate cognitive interventions can inoculate youth to some extent against being influenced by media violence and can reduce their exposure to media violence  However, more tests of interventions need to be done. Doing that will require a good theoretical understanding of the underlying processes, a strong evidentiary basis, systematic evaluation, and well-defined outcome goals.

What were the key factors in the majority opinion in Brown v. Entertainment Marketing Association, in which the US Supreme Court struck down a California law denying minors the right to buy violent video games without an accompanying parent?  Was the majority ruling based on a reading of the scientific evidence or on other legal factors?  Why didn’t Justice Breyer’s strong dissent, based on his reading of the scientific evidence, have more influence?  Can any law restricting minors’ access to violent video games survive court scrutiny?  On what basis has the Supreme Court’s upheld laws restricting minors’ access to sexually explicit videos but not those restricting minor’s access to violent videos?

The Supreme Court upheld the lower court decision finding the California law unconstitutional by a bare majority that included an unusual combination of conservative and liberal Justices and resulted in our separate opinions.  Professor Campbell doubts that the scientific evidence regarding video games and violence determined the outcome of the case.  Rather, the experienced Supreme Court advocates representing the video game industry did a better job framing and presenting arguments in the Supreme Court than California’s much less experienced counsel.  She believes that California made a strategic mistake in framing the issue as whether the statute prohibiting the sale of extremely violent video games to minors should have been subjected to the same deferential standard of review employed by the Court in an old case involving obscene magazines.  None of the Justices agreed, and because California failed to offer an alternative argument, the majority found the law unconstitutional by applying the most difficult standard of review known as “strict scrutiny.”  Professor Campbell suggested that instead of conceding that the statute regulated speech, it should had argued that it merely regulated conduct, that is, the sale of violent video games to minors.  This might have resulted in the application of an intermediate standard of review, which the state might have been able to satisfy.